The Parksville Quilt House Quilters Guild was founded in 1979. The Guild grew from the small group of students who attended Flo Conconi quilt classes at the Quilt House in Parksville. Flo started teaching quilting classes in the early1970’s when several friends asked her to show them the skills she had retained from her childhood.

The guild grew out of this workshop and has been growing ever since! The guild is the second oldest in the Province and it was first on Vancouver Island. Members come from all over the island. Our members vary in age from young to seniors.

The purpose of the Guild is "To promote and encourage interest in the excellence of quilting." 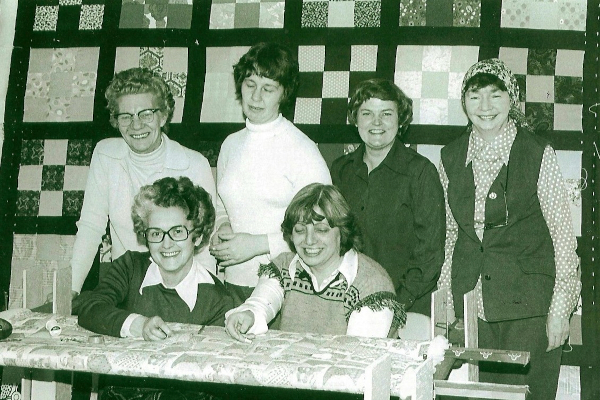 Back row from the left: Flo Conconi, Jean Van Holst, Jeanette Eaton and Vivien Leakey. Front from left - Betty MacPherson and Shirley Orrick. Flo was the one that started giving quilting lessons in a studio on their property in Parksville

"Cutting up perfectly good material in small bits and sewing them together to make a quilt? Whoever heard of such nonsense when perfectly good bedspreads are in all the stores!" The American Bicentennial revived interest in the quilting skills of pioneer women. Canadian women also re-visited their own heritage. In the late 70's a group of women in Parksville and Qualicum were doing just that, and having fun doing it. They met in Flo Conconi's "Quilt House" where Flo was happy to share her knowledge and quilting skills. The "Quilt House", built by Flo's husband, was the size of a large double garage and stood on the back of her property. It was always "open house" in this studio and students dropped in at all hours for help with projects. It was the birthplace of the "Parksville Quilt House Quilters' Guild".

The first groups of Flo's students were so enthusiastic that they organized a two-day quilting workshop in Parksville. Interested people from other Island communities were invited to attend.

The experience of working together in planning the workshop gave birth to the idea of forming a guild of quilters. The guild would be centered in Parksville and membership open to all Island residents. Interested quilters discussed the idea in the spring of 1979, forming an interim executive and drafting a constitution. In September 1979 they were joined by other interested women, an executive was elected, some guidelines drawn up for future meetings, and the draft constitution put in the hands of the new executive for polishing and finalizing. The "polishing" of the constitution took more time than real quilters had to offer, but the Attorney General's Department finally accepted it in 1981.

But the quilters didn't wait for authorization before starting regular quarterly meetings. By the time the "Parksville Quilt House Quilters' Guild" was registered as an educational society the first of the quilt shows was planned and presented. The "Century of Canadian Quilts" featured antique quilts owned by Island residents as well as the work of Guild members. The "Silver Threads" show in 2006 was the silver anniversary of the first quilt show on Vancouver Island.

The Logo and Locations

The first two meetings of the Guild were held in the Quilt House on Stanford Avenue in Parksville. The surprising response of interested quilters meant a larger meeting place must be found - the beginning of many more moves for the same reason.

We relocated to the hall of the Nanoose Library, which was great for the next few years.

Meantime we were having difficulties with the registration of the Constitution. We loved our name but it didn't satisfy the government serfs. They insisted we be identified by location and supplied the name "Parksville Quilt House Quilters Guild". Flo's home address became our registered address.

When Flo moved to Victoria we started getting mail in a P.O. Box. "Ha!" said Victoria, "You must have a street address for your place of business". That was solved by the secretary running over to the Post Office on Craig Street and submitting the street address of the Post Office, which was accepted by the authorities. Even after the post office moved and the address became "Chuffins Café", it remained our official registered address for several years.

Once the Guild started meeting in the Nanoose Library we decided it was time to have a logo. So a competition was held and a variety of designs submitted for a popularity vote by the membership. The final design was a combination of the work of two artists. It combined a feeling for the friendship of the members gathering in the original Quilt House surrounded by the significant large Q to indicate the purpose of the group. The "chimney" was a thimble with a thread of smoke passing through the eye of a needle. The tail of the "Q" was the path to the always-welcoming doorway. This small logo was later transformed into a wall hanging and presented to Flo Conconi with her Life Membership in the guild when she moved to Victoria.

When the Guild wall hanging was made, the words, "Parksville" was added to the design. The logo has been slightly modified during the years but its initial significance remains.

Between the first workshop in 1979 and 1981, Guild members had demonstrated their skills at the Parksville Arts and Craft Shows at the Community Hall and at Qualicum's annual street fair. A small show was hung for one day in a mall in Nanaimo and our first "raffle" quilt made and ticket proceeds donated to the Community Arts Council. We also hung some quilts in a fabric shop in James Bay, Victoria, at the shop-owner's request.

In 1980 Flo Conconi and Val Looy attended "Quilt Toronto '80" in Toronto. They had never attended a big quilt show before this. They were so impressed and enthusiastic that we were inspired to have a quilt show of our own. Flo was sure her students were doing stitching equal to what she had seen in Toronto. Well, you know the saying about those rushing fools. That was a synonym for us, but we paid no attention to myths and granny sayings and started planning for a show to take place in 1981. After all, we had ten months to get ready and that should give our baby lots of time to develop.

July 1-4, 1981, were the dates set for the endeavour, as this would cover two national holidays on a weekend. We expected we could trade on tourists attending and maybe some quilters would come from the States if we advertised in the two American quilt magazines. We persuaded Parksville Council that we were contributing to the tourist trade and they graciously provided a "Grant in Aid" for seed money. Should we make this a feature show of some kind? Did we have enough quilts of our own to put on a good show? How could we guarantee enough quilts for a good show?

The decision was made to ask to "borrow" antique quilts owned by residents of Vancouver Island. We were sure there were a lot out there but could we persuade their owners to loan them to us? We were so naïve we thought we would just advertise in the Island's local papers, asking interested quilt owners to contact us. We also managed to get a couple of half-hour interviews on the Victoria TV station on a popular afternoon talk show.

What a response!! Half an hour after the show, our Victoria phone contact had received three offers of quilts and two dozens more followed. Up-Island residents began phoning. Arrangements were made to view and collect suitable quilts.

Funny thing about quilt owners. These quilts had been quietly stored in cupboards for years because nobody seemed interested in them, but the minute the word was out that we were interested, their family pride rose to the surface and they were anxious to share their treasures.

A guild team made countless trips up and down the Island, jurying quilts.

The generosity of Island residents gave us our title - "A Century of Canadian Quilting".

The show was "hung" under Val Looy's supervision and artifacts were gathered from homes of guild members and generously loaned by local merchants. As a result the first of the 2,000 visitors walked into room settings reminiscent of the nineteenth and early twentieth century. Over 150 quilts were hung on the walls and furniture of "bedrooms", "dining rooms", "parlors" and "nurseries" and on the huge (and heavy) triple screens designed and built by a Guild member's husband.

The catalogue provided a few notes on the provenance of the historical quilts and notes on the other quilts. This, too, was a pioneer challenge for Joan Arial's new computer. Entrance tickets to the show were sold before the show and numbered to entitle the holder to one of the three door prizes. These tickets were a real bargain-the visitor retained the ticket and could return to the show as many times as he or she wished during the four days it was held. Complimentary tickets were provided for the care homes.

We applied to the RCMP for a license number for a local raffle, which was the law at that time. When they discovered the value of the prizes we were offering we were advised contact the Provincial Government.

We invited the three existing Island quilt shops to set up a Merchants' Mall and had quilting demonstrations and a small boutique for the few members who had extra quilts to sell.

That first Island show was a long way from the many professional shows we now see each year in the many centers throughout the Province where quilting was once regarded as the hobby of "Odd little ladies in tennis shoes". But we are still proud to have put on "A Century of Canadian Quilting."

Note: Bette was one of the founding members of the PQHQG, serving as President in 1980 - 1982. She dedicated her life to the guild and was always a strong advocate for quilting. She passed away recently and is respectfully honoured and remembered.

Congratulations to all who served as Presidents of the Parksville guild! A number are now deceased, some moved away from Parksville and many are still loyal guild supporters. The following determined and faithful members provided great leadership to our great guild. Thank You All!